African Americans, Hispanics, and Native Americans comprise 30% of the United States population, but members of these racial/ethnic minority groups are underrepresented among NIH-funded researchers. Among researchers funded by the National Institute on Drug Abuse (NIDA) in 2010, for example, 2% were African American, 4% were Hispanic, and less than 1% were Native American. The Learning for Early Careers in Addiction and Diversity (LEAD) training program was developed to support the efforts of assistant professors from underrepresented racial/ethnic minority backgrounds to receive funding from the National Institutes of Health (NIH) as independent scientists.

The LEAD Program is integrated within the National Institute on Drug Abuse (NIDA) Clinical Trials Network (CTN). The CTN provides an enterprise in which NIDA, treatment researchers, and community-based service providers across the country can effectively work toward new treatment options in community-level clinical practice. The LEAD Program uses a team mentoring approach: each LEAD Program scholar works with a CTN primary mentor, while also receiving guidance from a UCSF mentor and a nationally regarded racial/ethnic minority advisor. The LEAD training program also includes a funded four-week intensive program at UCSF each summer where scholars in all stages of the program participate in grant writing and manuscript development workshops to help them obtain grant funding. Other career development workshops might touch on topics that the researchers may encounter later in their careers, such as how to run a lab or an overview of power analytics.

Dr. Masson’s research has focused on the design and evaluation of behavioral interventions to address HIV and HCV health disparities among drug using populations. Her research has included the cost and cost-effectiveness of methadone maintenance treatment, integration of syringe exchange services in a hospital setting as a strategy to reduce HIV transmission and increase healthcare access, barriers to healthcare access among drug users, HIV/HCV testing and treatment, and a randomized trial of a hepatitis care coordination intervention in the methadone treatment setting.

Dr. Masson has been a core faculty member within the UCSF Postdoctoral Training Program in Drug Abuse Treatment and Services Research since 1998 (T32DA007250; Director, James L. Sorensen), and has mentored and co-mentored several promising early stage investigators through this training program. For the past 11 years she has also served as the coordinator and mentor for undergraduate students in the UCSF site of the Summer Research with NIDA program. Dr. Masson also serves as the co-Director of the local Dissemination Team for the Western States Node of the NIDA Clinical Trials Network (CTN), and is a member of the national CTN’s Minority Special Interest Group. The Western States Node is one of 13 regional research centers in a national network dedicated to improving drug abuse treatment by determining effectiveness of promising and clinically relevant interventions in multi-site trials, and by supporting the transfer of effective interventions into clinical practice.

Dr. Sorensen began his research in drug abuse 30 years ago, directing an NIDA-funded double-blind study of detoxification from heroin using LAAM or methadone. An experienced investigator and leader, he has published 250+ articles, chapters, and books. Dr. Sorensen was the chief of substance abuse services at San Francisco General Hospital from 1982–1995, has led numerous NIH R01 research grants, was director of the NIDA-funded San Francisco Treatment Research Unit (1989–1994), and leads or participates in numerous other NIH and non-government supported research and training programs. Dr. Sorensen was a member of the Institute of Medicine Committee on Community-Based Drug Treatment, which produced the report that led to development of the Clinical Trials Network, and he has made the linking of research and practice his major area of focus for the next decade. His current research focus is as the contact program director and senior research investigator of the NIDA-sponsored (UG1) Western States Node of the NIDA Clinical Trials Network, where he has overall responsibility for the scientific, administrative, and clinical performance of the node and the participating programs.

Dr. Sorensen is dedicated to training future researchers. He has a long record of mentoring and leading research training programs with a focus on development of minority investigators. He is a clinical psychologist who serves on the medical staff at Zuckerberg San Francisco General Hospital and Trauma Center, where he is the leader of the Public Service and Minority Cluster of the Clinical Psychology Training Program. He is a co-director of the CAPS Visiting Professor R25 program, as well as the Learning for Early Careers in Addiction and Diversity (LEAD) program. Dr. Sorensen heads an NIDA-funded T32 grant, the Drug Use Treatment and Services Research Postdoctoral Training Program, and serves as mentor in the Department of Psychiatry’s Clinical Services Research Training Program. Altogether, Dr. Sorensen has served as primary mentor to 20 predoctoral and 23 postdoctoral fellows.

Recently, Dr. Sorensen has focused on understanding how front-line staff cope with ethical issues as they treat substance use disorders. In 2018–2019, he gained an international perspective on these issues as a Fulbright Fellow at University of Calgary in Alberta, Canada.

The research of Dr. Guydish concerns access, delivery, and organization of substance abuse treatment services. His experience in addictions research includes studies evaluating efforts to improve access to publicly-funded drug abuse treatment, assessing federal policy to end addiction as an SSI disability category, evaluating needle exchange as an HIV prevention strategy, and investigating Drug Court and intensive case management interventions for drug-involved offenders.
In the course of his career, Dr. Guydish has been primarily responsible for the training of 16 pre and postdoctoral scholars, for both clinical and research training. Of these scholars, 5 (31%) have been underrepresented minority scholars, and an additional 5 (31%) were of other minorities not currently counted as underrepresented by the NIH. Much of this work occurred in the context of the UCSF NIDA T32 postdoctoral training program in Drug Abuse Treatment and Health Services Research, which is one of the programs used as a model for the LEAD program. In addition, and for the past 17 years, Dr. Guydish leads an annual 6 month Scientific Writing Seminar directed toward postdoctoral fellows and junior faculty, designed to support participants in the process of scientific writing and publication. In that time, the seminar has had a total of 162 seminar participants and, using rules which count only one manuscript per participant per year, the seminar has a 70% submission rate and a 64% publication rate for papers it has supported.

Each scholar is individually supported by an assigned mentorship team including three mentors:

Model Drug Abuse Treatment Research Programs
Early career scholars can benefit from studying career paths of senior investigators who developed a successful independent research program. In this seminar, senior scientists discuss how they developed their current research programs. Topics include how the senior scientists identified a line of research, overcame obstacles to keep their research program moving forward, and solved methodological problems that arose over the course of their research. Seminar speakers will include nationally recognized experts whose area is relevant to the research interests of the scholars and the individuals who will serve as the scholar's primary mentor.

Research Design
In this seminar, a brief introduction to clinical trials is presented, and practical advice is given from scientists who have conducted randomized controlled clinical trials.

Quantitative Research Methods
A biostatistician assesses each scholar’s needs for statistical analyses. When necessary, seminars will be offered on topics relevant to multiple scholars, as well as individual sessions with scholars who have specific needs. In addition to conceptual overview of research methods topics, specific examples from published clinical trials will be used to illustrate the unique ways that these analyses and design issues are dealt with in the substance use disorder treatment research field.

Cultural Adaptations of Evidence-Based Treatments
This seminar provides an in-depth discussion of the process of culturally adapting evidence-based treatments, using examples from the drug abuse treatment field. Specific topics include conceptualizing culture and context; selecting a framework and level of adaptation; identifying core intervention components; involving the target population; and identifying factors that influence cultural relevance and adaptation mismatch. These issues are addressed with an emphasis on practical strategies for resolving the competing demands of maintaining fidelity to the core elements of the original intervention and adapting the intervention to meet the needs of the cultural group.

Implementation Science
This seminar will provide didactic sessions comprised of multi-disciplinary set of theories and methods aimed at improving the process of translating research evidence into health-related practices. It emphasizes the integration of interventions into diverse practice settings with a community-engaged approach. Examples of implementation science studies in the substance use disorder treatment field will be reviewed through directed and educational readings and presentations.

Postdoctoral Scholar Professional Development
This seminar is designed for LEAD scholars who are enrolled in postdoctoral training programs. It will include topics such as applying for faculty positions, preparing for interviews, negotiating job offers, organizing career goals and achievements into a cohesive narrative, giving and receiving career advice, and media and communication training.

Pilot Study Development Workshop (first-year scholars)
In this workshop, first-year scholars develop the rationale and theoretical model of their overall program of research, as well as present their initial conceptualization of a pilot project, discuss potential implementation challenges, and obtain feedback from seminar leaders. Each first-year scholar will make a formal one-hour presentation, and receive feedback regarding the scientific merit and viability of the proposed research project. During the third and fourth weeks, scholars receive feedback from experts in the field (i.e., CTN mentors, minority advisors). Experts provide an alternative perspective from that of the CTN mentor and give feedback on the scientific merit of the proposed research and strategies for overcoming weaknesses identified in the proposal.

For third-year scholars, the focus of this workshop is to provide scholars with guidance about how to prepare revised applications for submission to the NIH. Topics for discussion include:

In addition, the workshop will focus on review and critique of revised grant applications.

Manuscript Development Workshop
In this weekly 90-minute workshop, scholars submit a pre-publication manuscript prior to each summer intensive training session. Each manuscript is assigned two reviewers, one scholar and one program faculty member. Each reviewer prepares a formal written critique of the manuscript. Reviews are presented orally in a group discussion format. This activity enables scholars to receive feedback on their manuscripts prior to submission to peer-reviewed journals, facilitates development of scientific writing skills; strengthens ability to critically evaluate the scientific literature as reviewers; and enhances understanding of the peer review process.

A key to successful research training is identifying a first high-quality research project that is scientifically innovative, important, challenging, and feasible based on the scholars’ knowledge, abilities, and available resources. Scholars will complete an independent research pilot project related to substance use and addictions research. They are provided with pilot funds to conduct formative research that is expected to lead to larger grant proposals and provide data for the preliminary studies section of these proposals.

During the summer intensive program, scholars will participate in weekly pilot study development workshops where they will develop and refine proposals with feedback from LEAD faculty members. Scholars may propose quantitative or qualitative studies that will clarify their conceptual models, identify key variables, and clarify feasibility issues. It is expected that scholars complete their pilot study over the course of 18 months during the three-year program.

All applications must satisfy the following requirements:

Offers to participate in the LEAD program are contingent upon availability of funding.

Applying to the program 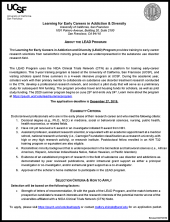 Something familiar and something new: Introducing the UCSF Department of Psychiatry and Behavioral Sciences